International workshop to mark the first direct EP elections in 1979 was organized on September 17-19, 2020. The significant step for UNITY was discussed on the ground of 1979’EP Elections and the changes that the elections brought to the Union and to the citizens, tendencies and trends of the voters’ participation during the years will be explored as well as the “informed” voter. The special spirit of participation was explored within the models of encouraging youth in public life, based on the electoral EP history. The international participants, together with limited number of young local participants worked to learn and analyze the trends in the voters’ participation in EP elections, the specific member states characteristics. The hosts from Porto had organized a “River Event” when in a boat tour the story of rebuilding and reconstructed Porto was shown, EU regional policy and its local marks were shown and discussed. During the boat tour the story telling of the local people was charming and remarkable.
In parallel to the international event, the Porto school of Second Chance Education, organized a youth event as an event second phase and dissemination activity. During the youth meeting, the students were presented the international presentations, they had discussion on the founding values that brought the Union together, the importance of participation in decision making process and voting in elections. Young people stated out the importance of the unity and togetherness of the European Union for their own future. 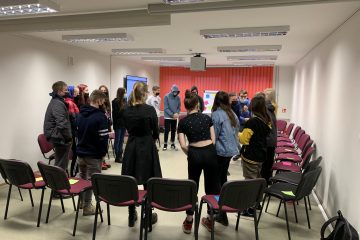